[Ed. Note: this was written for Triumph cars, but the fundamentals are the same for most vehicles; even more modern cars with an electronic distributor (hall sensor) works in essentially the same way, with a computer "opening the points" instead of a mechanical switch. Obviously, none of this will apply to very modern "distributorless" ignition systems, although they will still have an ignition coil.]

Most LBCs use this type of ignition system. Later cars benefit from the miracles of Electronic Ignition systems which are not described here, but most of the same principles apply. One can think of electronic ignitions as "improved points."

The basic ignition system consists of: the Ignition Coil, Points, Capacitor (aka Condenser), Distributor and Sparking Plugs. A ballast resistor may also be included in this system. Various bits of wire connect all these parts together and move the electrons to the right place at the right time, hopefully. Without the aid of diagrams, the scope of this is limited, but the function of each component is described briefly below, For simplicity's sake, no formulas will be used, only descriptions of the various aspects.

Supporting Member to hide this ad & support a small business

This is the part that makes high voltage (approx. 20KV for a stock coil, and up to 40KV for a high performance coil) for the spark plugs from the low voltage (12V) that is supplied to it by the car. It is basically a simple transformer operating on the principle of "mutual inductance". The coil stores up energy over a relatively long (for ignition systems) period of time [dwell] and then releases it suddenly to the spark plugs via the distributor and HT wiring. 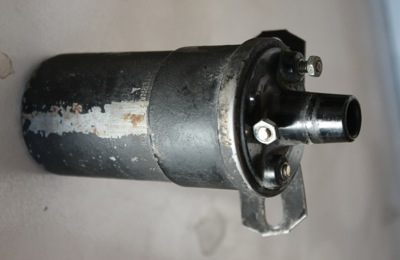 Ignition points are a set of electrical contacts to switch the coil off and on at the appropriate time. The points are opened and closed by the mechanical action of the distributor shaft lobes pushing on them. The maximum amount of (coil primary) current that can be switched by points is about 4 amps. Above this level points burnout may occur.

Supporting Member to hide this ad & support a small business

The capacitor performs several functions. It prevents the points from arcing and prevents coil insulation breakdown by limiting the rate of voltage rise at the points. It's primary function is to provide for a rapid decay of the primary coil current. The capacitor also "third-harmonic" tunes the coil, raising the peak output voltage and increasing the secondary voltage rise time. This increases the efficiency and the amount of energy transferred to the spark plugs. If the coil secondary voltage rises too quickly, excessive high frequency energy is produced. This energy is then lost into the air-waves by electro-magnetic radiation from the ignition wiring instead of going to the spark plugs where we would like it to go. Voltage rise time should be more than 10 microseconds; a 50-microsecond rise time is OK. Conventional systems have a typical rise time of about 100 microseconds.

The electrical "traffic cop" which directs the voltages to their proper places at the correct time. It routes the high voltage generated by the coil to the intended spark plug via the HT wiring. The distributor houses and operates the points, and capacitor (described above). The standard points type distributor can produce ignition timing errors in three ways: 1) wear of the rubbing block, 2) variations in the cam profile, 3) shaft eccentricity. 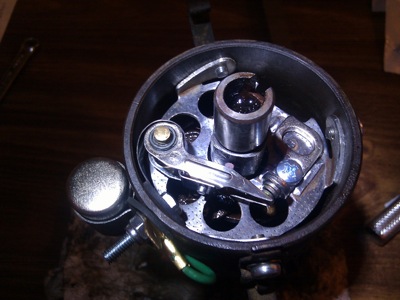 These are the business end of the ignition system. The spark plugs take the electrical energy provided to them by the rest of the ignition system and turn this into the (hopefully) optimum spark event which ignites the fuel. Proper polarization of the coil is necessary to provide a negatively charged high voltage to the center electrode of the spark plug, which is hotter than the outside electrode. This enables us take advantage of thermionic emission* which reduces the voltage required by 20 to 50% for a given spark magnitude. The plug gap affects both the voltage and the energy required. As the plug gap is increased, the required voltage increases, but the required energy decreases.

*Thermionic emission - (aka Edison effect) The propensity of some metals to give up their free electrons more easily when heated, actually boiling off of the metal. This is the fundamental operating principle of vacuum tubes, once called thermionic tubes. 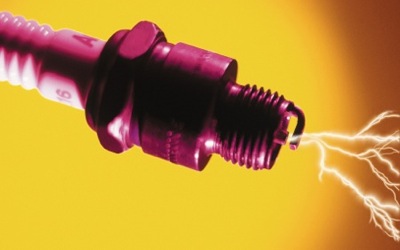 This is an electrical resistor which is switched in and out of the supply voltage to the ignition coil. It makes the engine much easier to start by effectively doubling** the voltage provided to the ignition coil when the engine is being cranked, compensating for the reduced battery voltage. This provides a much better spark just when the car needs it most. When starting a cold engine, the plugs and the air are cold, the cylinder pressure is up, and the fuel / air mixture is poorly controlled. The oil is thick, the battery is cold and its voltage drops as much as 60% because of the high current drained by the starter motor. It's a wonder the car starts at all.

** Actually, it cuts the voltage to the coil in half when the car is already running, but it's easier to understand the first way. A nominally 6 Volt coil is used in a ballasted ignition system.

Resistance built into the coil, in addition to the inherent resistance in the copper windings, to limit current through the points at idle and low rpm operation. This resistance is not to be confused with the ballast resistor mentioned above. It serves a completely different function. As stated above, at low engine speeds, the primary coil current can reach a higher value than at high speeds. If a coil is designed to provide sufficient output at high speeds, the primary coil current can reach excessive values at low speed. Conversely, if the coil is designed to limit low speed primary current, it may lack sufficient power at high speeds.

One way to provide for both low and high speed operation is to provide a "ballast" resistor in series with the primary winding. This resistance consists of an iron wire coil. Iron has the property of increasing resistance with temperature. At low speed, the high current heats up the iron wire, increasing its resistance, and reducing current. At high speed, the current, as described above, is less, so the iron wire resistance does not increase, thus the current is not limited. There are other design technique available to provide for wide speed variations, so not all coils will use an internal resistance.

The degrees of rotation of the cam/distributor during which the points are closed. During each rotation of the cam/distributor, the points must open and close once for each cylinder. For a 4 cylinder engine, this allows 90 degrees of rotation for each cylinder, (360/4,) for a 6 cylinder, 60 degrees, and for an 8 cylinder, 45 degrees. For reasons stated above, the points must stay closed long enough to allow the coil primary current to reach an acceptable value, and open long enough to discharge and produce a spark. Typically, the ratio of closed to open is on the order of 3 to 1, ie closed for 45 degrees and open for 15 in a 6 cylinder engine.

This really only scratches the surface of ignition systems. You have been spared topics like Cylinder pressure, Ignition-voltage waveshape, Timing, Capacitance, Inductance, formulas with Greek letters and other technical mumbo-jumbo. But then there's always part 2...

Photos courtesy Nathanael Burton and and Nick Ares, used under the terms of of the Creative Commons Attribution-ShareAlike 2.0 Generic license.

— Understanding the Ignition System —
Written by Dan Masters – Created 2006-04-02 Published 2006-04-02
Contents © Copyrighted and published under the following terms:
Released under the terms of the CC Attribution-NonCommercial-ShareAlike 2.5 License

Did you find this article helpful? Rate it or ask a question below!

Comments on "Understanding the Ignition System"

Leave a rating or a comment below, and get instant reply notification via email
If you have a long question, or a question not directly related to this article, please start a new topic in the Discussion Forums

Click any icon to bookmark this page with your choice of services. Hover the mouse to see where a link goes.
Don't see your favourite service? Contact the webmaster with details.